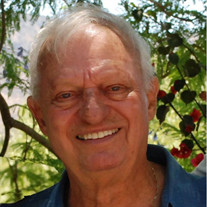 Anthony W. Pasano peacefully passed away 8/4/18 from complications of congestive heart failure. Born 12/28/33 in Auburn, New York son of Italian immigrants, MarcAntonio and Eleanore Pasano. The family moved from NY to Santa Monica, CA where they established themselves as grocers in the St. Monica Parish. Anthony enlisted in the USAF to serve in the North Korean war as an ECM radio specialist stationed at Okinawa, Japan. His service benefit allowed him to attend the University of the Americas in Mexico City, Mexico, where he studied Business Administration and met and wooed his future bride at the Newman Club. They married in Mexico and returned to CA to start their family, ultimately settling in the San Fernando Valley. Anthony spent 22 years working as an appraiser at the LA County Assessor’s office. Upon retiring from the county, he started his own company, Approved Appraisals Associates and was an Adjunct Professor at Pierce College. He was highly involved with raising his children (YMCA Indian Guide Chief and Girl Scout camp master.) He was strongly civically minded – founding, leading and/or belonging to Toastmasters, Optimist Club, CSUN, LAPD-Devonshire Division community advisory board member, Sherwood Forest Homeowners Association, Tea Party Patriots, and was one of the original docents at the Reagan Library where he proudly served for years. He was also spiritually involved in his local Roman Catholic Church, Our Lady of Lourdes (OLL), Northridge, where amongst others, he served as usher and lector, founder and President of the OLL musical theater group – the longest such running entity in the LA Archdiocese, President of the OLL Men’s Club (and multiple runner up in their decades old chili making contest), he was also co-leader of the annual Public Square Rosary. He is survived by his wife of 60 years, Carmen Correa Velasco; his brother Ken, sister Rose, three children: Mark Anthony, Tania Pasano (Storrs) and Armand Joseph as well as his six grandchildren: Natalie, Adrienne, and Richard Storrs, Anna Maria, Anthony and Gianluca Pasano (all born in the SFV/LA area). “A La Famiglia” might have been his motto, but God and Country were his “roots.” May His perpetual light shine upon him. Services for Anthony will be as follows: 7:00 pm Rosary on Wednesday, August 15, 2018 at Utter McKinley Mortuary, 11071 Columbus Ave. Mission Hills, CA. 91345. Funeral services will be held Thursday, August 16, 2018 at 10:30 am at Our Lady of Lourdes Catholic Church, 18400 Kinzie Street, Northridge, CA. 91325. Burial will be immediately following at San Fernando Mission Cemetery, reception to follow at Stroup Hall, OLL. Memorial contributions in honor of Anthony W. Pasano may be made to: Our Lady of Lourdes, check c/o OLL Building Fund or www.ollnr.org, Faith Direct, One Time Gift, Crespi Carmelite High School, www.crespi.org, Crespi Man Fund, and/or the Sisters of St. Louis c/o Sister Judy Dieterle, 2230 Mulholland Drive, Woodland Hills, CA 91364-4933. (818) 883-1678

The family of Mr. Anthony Walter Pasano created this Life Tributes page to make it easy to share your memories.

Send flowers to the Pasano family.