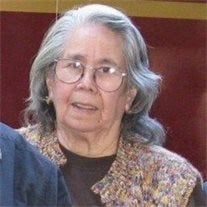 CONCEPCION "CONNIE" HERNANDEZ RAZO Connie found pleasure in life's simplicities. Although her days on earth ended on Sunday January 6, 2013, at the age of 78, after a courageous battle with cancer, her spirit will live on in the flower garden to which she tended, the kitchen where she made her famous homemade flour tortillas and banana nut bread, as well as in the memories of her beloved multicultural family. She was predeceased by her parents, Joaquin and Genevieve Hernandez; and brother, Donald. She leaves behind a large close-knit family that spanned far beyond her immediate relatives. Connie is survived by her husband of 54 years, Ralph; her son Vince, daughter-in-law Jane, and granddaughter Lisa; daughter Marti, son Michael, daughter Virginia; brothers, Danny and Ruben and sister Gloria as well as many cousins, in-laws, nieces and nephews that can be traced from Pomona to Santa Maria and beyond, plus those she cherished as part of her family, including Cathy Williams, George Kurbikoff, Bret Henry and Frank Aldrete. A long-time resident of the San Fernando Valley, Connie was born in Pacoima on February 15, 1934 and graduated from San Fernando High School in the Summer of 1952. She met Ralph, a U.S. Army veteran of the Korean War, and they were married at Saint Ferdinand's Church on May 24, 1958. Connie enjoyed her family's annual road trips to various locations such as South Dakota, Wyoming, New Mexico, Oregon, Arizona and numerous National Parks. She was happiest when her Granada Hills home was full of friends and relatives for the numerous bbq's she and Ralph hosted for almost every major holiday. They were also well known for their annual Christmas gatherings consisting of a multi-ethnic menu. She also enjoyed just relaxing with her Basset Hounds, working on her puzzle books and watching telenovelas. Connie was a long-time blood donor to the Red Cross and volunteer at the Daphneyland Basset Ranch in Acton. The Viewing will take place at St. John Baptist de la Salle in Granada Hills on Monday, January 14, 2013, 10:30 a.m., followed by the Rosary at 11:00 a.m., and Funeral Mass at 11:30 a.m. Interment to follow at San Fernando Mission Cemetery. In lieu of flowers, donations can be made in Connie's name to her favorite charities: Basset Rescue Network, Inc. (Daphneyland), 6221 Shannon Valley Road, Acton, CA 93510 or MEND, Meet Each Need with Dignity, 10641 N. San Fernando Rd., Pacoima, CA 91331. UTTER McKINLEY SAN FERNANDO MISSION MORTUARY Directors (818) 361-4751

CONCEPCION "CONNIE" HERNANDEZ RAZO Connie found pleasure in life's simplicities. Although her days on earth ended on Sunday January 6, 2013, at the age of 78, after a courageous battle with cancer, her spirit will live on in the flower garden... View Obituary & Service Information

The family of Concepcion "Connie" Razo created this Life Tributes page to make it easy to share your memories.