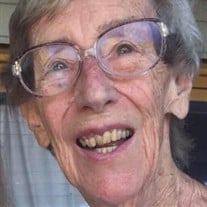 Diane M. Slattery June 3rd,1934 - November 30th, 2018 Remembered for her wit, intelligence, and faith, Diane Mary Million was born in Hollywood, the middle daughter of Gene and Maise Million. She attended Hollywood High and then UCLA where she graduated with a degree in Mathematics in 1957, one of the very few women in her class. During her college years, she became the youngest female licensed real estate salesperson in the state of CA in an effort to help out her father who was in the real estate business and was ill. She was active in the Newman Club throughout her time in college and the year she graduated, the CYOF named her Catholic Girl of the Year. She married Martin Slattery in 1959 and had 6 children over the next 10 years. Starting in 1965, she worked for the next 31 years at Lockheed as a Scientific Computing Engineer Specialist. She wrote a computer program that was widely used and worked on classified projects and aircraft deemed important to national defense. Active in her church, she tried her best to live out her Catholic faith in both religious and practical terms. She invited people who were experiencing homelessness into her house to live, for years at a time, on two separate occasions. She was an active parishioner at St. John Baptist de la Salle, attending daily mass for decades, serving as a Eucharist minister, and presiding over the St. Vincent de Paul Society. Perhaps most emblematic of her devotion to service (aside from raising six children!) was the weekly trip to North County Correctional Facility she made every Saturday for 27 years to celebrate a communion service with the men incarcerated there. Whether at work, at church, or at home, she was always quick to find the humor in a situation and was keen to make people laugh. She will be missed by all who knew her. She is survived by her sister, Martina Million; five of her six children, Teresa Slattery, Cathleen Reed, Monica Tracy, Laura Slattery, and Steven Slattery; her seven grandchildren, Christopher Tracy, Allison Tracy, Jonah Reed, Nile Reed, Isabelle Ryan, Roman Slattery, and Fiona Slattery; and her two great-grandchildren, Trevor McCanna and Audrey Tracy. She is preceded in death by her sister, Patricia Million and her eldest son, Thomas Slattery. Diane has asked that in lieu of flowers, please send donations to either of the following: St. Vincent de Paul LA 210 North Ave 21 Los Angeles, CA 90031 https://svdpla.org/donate/ The Office of Restorative Justice 5011 White Oak Encino, CA 91316 There will be a vigil (prayer and sharing of memories) at Utter McKinley San Fernando Mission Mortuary, 11071 Columbus Ave. Mission Hills from 6:30-8:30 Wed, 12 Dec. A funeral mass will be held at St. John Baptist de la Salle Catholic Parish at 16545 Chatsworth St. Granada Hills, Thurs, 13 Dec at 10:00 am. Burial follows at San Fernando Mission Cemetery. Reception at Diane's home in Granada Hills to follow.

The family of Ms. Diane Mary Slattery created this Life Tributes page to make it easy to share your memories.

Send flowers to the Slattery family.