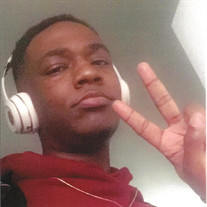 Dedicated student. Leader. Competitive gamer. Brother. Son. Grandson. Uncle. Nephew. By all accounts Elijah Michael Clayton was an extraordinary young man. Adored by his family and all those he came in contact with. Elijah loved his family. He liked to have a good time, loved to play the dozens, harass his loved ones and was a well-regarded young man. On June 19, 1996 Elijah Clayton was the first born son to Erin Reid and Michael Lamont Clayton. When Elijah was a baby, his parents split and his mother married Delano Hankins in 2003. Since their union, Delano was father to Elijah and played a pivotal role in the man Elijah became. As a young man Elijah attended Nestle Elementary and Portola Middle School in Tarzana, CA. Early on Elijah demonstrated proficiency in math and science. Elijah also loved sports and was a statistical genius. As his mother recalls, when Elijah was a child he would go from Winnie the Pooh to ESPN with the ease of any adult twice his age. With a proclivity towards math, science and statistics, it made complete sense that Elijah was drawn to computers as a child. Eventually, Elijah's interest in computers led him into the gaming world, which eventually became his life's passion. Elijah began playing Madden at 6 years old. Throughout his adolescence and teen years Elijah (or Trueboy as he was known in the gaming community) honed his skills in Madden until he went on to become one of the top gamers in the country. According to Elijah's EA Sports profile he was, "known for his elite stickwork and ability to juke, spin and hurdle his way around his opponents. Trueboy advanced all the way to the semifinals of the 2018 Ultimate League on the heels of one of the best ground games in Madden 18. In 2017, he was the Jacksonville Jaguars Club Championship series representative. Trueboy made five consecutive EA Major Live Events dating back to Madden 17. He placed top-five in the MCS (Madden Championship Series) 2017 Madden Classic Bowl and Challenge, and won $5k with a 25th place finish in that year's Championship. Trueboy was a mainstay atop the MCS 2018 Leaderboard as well, with top-10 finishes in the Classic and Challenge. Over the last two MCS campaigns, Trueboy was the sixth-highest money earner in competitive Madden. His versatility when it comes to playbooks and game planning, is what kept Trueboy locked-in as on of the perennial competitors in the scene." As passionate as he was about gaming Elijah was an equally dedicated student. Elijah attended Chaminade College Preparatory High School, where he was a scholar athlete. During his time at Chaminade College Preparatory High School, he maintained a 3.2 gpa, while competing in Track, Basketball and Football all three years. In his senior year, Elijah transferred to Calabassas High School, where he continued to excel as a student and athlete until his graduation in 2014. After graduation, Elijah enrolled in Pierce College where he received his Associate's Degree in Computer Science in 2016. It was Elijah's goal to eventually work in the gaming and tech industries in Silicon Valley. Elijah was preceded in death by his grandfathers, Winston Theodore Reid Jr., William Hankins Sr. and his grandmother, Linda D. Clayton. He leaves to mourn hsi mother, Erin Reid, Father, Delano Hankins, Father, Michael Clayton Sr.: siblings, Delano Jr., Edward, Corey, Jonathan and Ahmad Hankins, Demajia Clayton, Bria Clayton, Michael Clayton Jr., Kaylin Clayton:grandmothers, Cynthia Morse and Margaret Hankins, grandfather, Walter Lee Clayton, niece, Braelyn Harmony Love Jones, and a host of uncles, aunts, cousins and friends.

Dedicated student. Leader. Competitive gamer. Brother. Son. Grandson. Uncle. Nephew. By all accounts Elijah Michael Clayton was an extraordinary young man. Adored by his family and all those he came in contact with. Elijah loved his family.... View Obituary & Service Information

The family of Elijah Michael Clayton created this Life Tributes page to make it easy to share your memories.

Send flowers to the Clayton family.