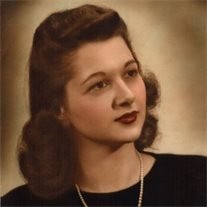 Betty Hensley was born on March 4, 1925 and passed on peacefully at home on November 6, 2017, after 92 ½ years. She was a loving mom and grandma, born as the eldest of the two daughters of a school principal and civically active mother. She met Bill in high school and married him after he returned from World War II in 1946. During the intervening years, she attended nursing school and worked at Delco Remy making airplane parts for the war effort. Betty and Bill were married for 40 years. During that time, she raised three children and then went to work for an agency as a bookkeeper for many years. She retired and married Olllie Accountius in 1992. Subsequent to his passing, she lived alone in the family home. Betty was very intelligent, mischievous, and a lot of fun. As a child, she earned the money to buy a bicycle by raising rabbits, and then had to get rid of them when they over-reproduced. She enjoyed many years of league bowling, winning numerous championships and awards. She was an avid bridge competitor, and she and Bill taught their three children how to play bridge as soon as they could sit at the table and hold the cards. Betty and Bill bought two weeks of a Jockey Club Las Vegas timeshare in 1978. For the next forty years, she used her room there, either with Bill, Ollie, or Debby. Needless to say, she had a larger entertainment budget with Debby than anyone else. She truly cherished the time she spent in Las Vegas with Doug and his family. In her later years, she befriended many in her neighborhood, as well as her nieces and nephews. She also learned how to use the computer to play games, and to use email and Facebook. She spent her free time playing Sudoku, Triominos, Uno, and Boggle, as well as reading. Her remaining family includes her children, grandchildren and great grandchildren: Her daughter Terry Siccama and husband Jack, grandsons Jesse and Jake (passed on in April 2017), Jack's daughter Melissa Syles, husband Stu, great-grandson Mason, and daughter Stacey Moya, husband Mervyn, great-grandchildren Gavin and Emma. Her daughter Debby Rudd and husband Clarey, granddaughter Tammy Miles and husband Grant, granddaughter Heather Porter, husband Mike and great-granddaughter Adeline, and granddaughter Tiffany. Her son Doug and wife Cindy, grandson Spencer and wife Jessie, and grandson Chance. She will be greatly missed! There will be a service on Friday, November 17, 2017 at 10:00 a.m, at the chapel in Oakwood Memorial Park Cemetary located at 22601 Lassen St, Chatsworth, CA. A reception will follow at Los Toros restaurant at 21743 Devonshire St, Chatsworth, CA 91311. T:818-882-3080.

Betty Hensley was born on March 4, 1925 and passed on peacefully at home on November 6, 2017, after 92 ½ years. She was a loving mom and grandma, born as the eldest of the two daughters of a school principal and civically active mother. She... View Obituary & Service Information

The family of Ms. Elizabeth " Betty" A. Hensley created this Life Tributes page to make it easy to share your memories.

Betty Hensley was born on March 4, 1925 and passed on peacefully...

Send flowers to the Betty" A. Hensley family.