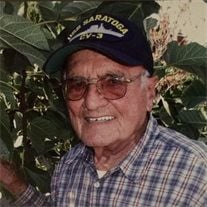 Frank J. Scattaglia aka Mr. Figs "Never give up" October 28, 1922 – September 4, 2015 Frank J. Scattaglia, lovingly known as Mr. Figs, passed peacefully in his home on September 4th, 2015. A loving husband, father, grandfather and great grandfather, Frank was at his happiest enjoying family time, tending to his garden, trout fishing and riding in the San Fernando Valley Veterans Day Parade every year since its inception. He was especially proud when he was selected as Honorary Grand Marshal in 2012. Born on October 28, 1922, in East Los Angeles, Frank grew up working with his father in the produce business, traveling to the Imperial Valley and Lake Elsinore regions to collect a variety of fruits and vegetables to sell at local street markets until joining the United States Navy in 1942. Frank served the country as a Chief Petty Officer during World War II on the U.S.S. Saratoga. His accolades include surviving an attack by Japanese suicide bomber planes, nearly sinking his ship, during the battle of Iwo Jima. After serving his country in the United States Navy, he worked and retired from Von's supermarkets where he worked as a produce manager. Frank's love for produce did not end there. He returned to his produce roots owning and operating a family business growing and harvesting figs, earning him the nickname Mr. Figs. Frank's figs were packed and sold to Von's markets and were even featured in the Olympic Village at the 1984 Olympic Games. Frank was preceded in death by his first wife, Angelina Scattaglia and is survived by his second wife, Theresa Scattaglia, son Vito Scattaglia, daughter Diane Chaney, grandchildren Tony, Kari, Trisha, Billy, Michelle, great grandchildren Talon, Joseph, Michael, Benjamin, Thomas, John, and Jack, and sisters, Mary Rubino and Connie Simplicio. In lieu of flowers, please consider a donation to the World War II Veterans support group, The Fisherhouse, at https://www.fisherhouse.org/ or by phone at (888) 294-8560.

The family of Frank J. Scattaglia created this Life Tributes page to make it easy to share your memories.

Send flowers to the Scattaglia family.