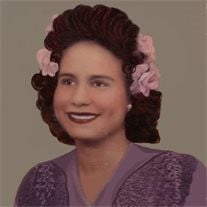 Helen Guadiana Silva January 31, 1926 - December 31, 2015 Helen passed on to her eternal home to be reunited with her mother, Elena Serrano, her father Cayetano Guadiana, daughter Myra, son Ruben, and grandchildren Billy, Jeffery, and Kimberly. Helen leaves behind her loving husband, Avilio, her daughters Sally and Maria (Lulu), and her sons Mario, Avilio Jr., John, David, and Richard. Helen also leaves behind 30 grandchildren, 45 great-grandchildren, and 6 great-great grandchildren. Helen was born at Los Angeles General Hospital in Los Angeles, CA on January 31, 1926. As a young woman she lived in Arizona, Illinois, Texas, and New Mexico. She eventually settled in Pacoima, CA with Avilio, where she raised her nine children. Helen will be remembered for her feisty, outgoing, larger-than-life personality, her beautiful smile, and her love of life - laughing, dancing, and singing out loud. Even as her time passed on, she was a force to be reckoned with. Helen was called to God on December 31, 2015 in North Hollywood, CA. She will live forever in our hearts and her beautiful spirit will live on through all of us.

The family of Mrs. Helen Guadiana Silva created this Life Tributes page to make it easy to share your memories.

Send flowers to the Silva family.