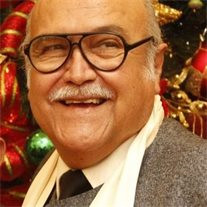 Jaime Hernandez Sr was a good man, NO.... He was a GREAT MAN! He was always smiling and laughing no matter what was going on around him. He was born January 10, 1944 to parent's Manuel and Carmelita Hernandez. He was brother to Elenor who passed in 2013, Tony, Maria Elena and Francisco-also known as Pancho….. He was married April 19, 1969 to his loving wife Romelia for over 45 great years….. He was a caring Father to Juan Manuel, Anthony, Jaime Jr, Ruthie & Conchita..... He was Grand Father to Candice, Camryn, Mario, Rene, His Dear Sweet Alexandria, His Adorable Loving Idalis, His Little Giovanni, Andrew, Baby Anthony and Little Mateo.... He was also Great Grand Father to His Cuties from New York - Jaelyn & Zoey, Gorgeous Little Ashreal from Tennessee & Adorable Little Bella. He also raised and was a father figure to Antoina Avitia-Guzman that called him Papi Jaime, Danny – Lena – Reina & Claudia Avitia, Gabriel Vega, his niece Helen Johnson, Enrique (Rick) Pulido and his nephew that passed, Miguel Angel Avitia. He also wasn't just a Grand Father to Idalis and Alexandria, he was their rock, their foundation, their most amazing role model, father figure they could ever have had. They were always with him. He adored them so much. There wasn't anything Jaime Hernandez wouldn't do for people in need. He was always ready to lend a helping hand to our cousins, aunts, uncles, other family members and anyone that needed a place to stay. He gave them a roof over their heads, a place to sleep and food to eat. He wasn't just a loving husband, a caring father, brother, uncle, cousin, family member and friends..... He was hope and an inspiration for people that needed to hear the word of God. Jaime's Testimony from his past about being an alcoholic brought a lot of people to The Lord. He touched many many lives throughout his years…. For over 40 years, Jaime Preached in Mexico at the Tijuana Jails once a month, including going to visit a few churches in Tijuana after preaching at the Jail. He never missed a month of going to Mexico to preach to the prisoners. He enjoyed seeing how he changed the hearts of people that thought there was no hope left for them because of where they were. He inspired them and uplifted their spirits through his testimony. Jaime Hernandez also visited the sick in hospitals, visited the elderly at convalescent homes, went to see people in need at their homes, all to read them a scripture from the bible, speak positive words to uplift their spirits when they have felt sick, bad or in need. He never missed an opportunity to speak to someone about how he came to The Lord after being an Alcoholic for over 20 years. Jaime Hernandez enjoyed going on Missions Trips to other countries to give his testimony and preaching to others that were in desperate need of help in saving their souls. He brought them the Word Of God and changed many lives in his travels. Just recently, Jaime Hernandez touched the life of a young man at a Sylmar Gym. They were both sitting in the Sauna Room. Jaime felt that he needed to share his testimony about his alcoholic worldly ways. Also, how he came to The Lord. He then told him where he went to La Trinidad Church and invited him. His testimony saved this young man from evil thoughts that were in his head about leaving his family, doing more drugs, drinking and hanging out with the wrong crowd. He went to church, turned his life around, He beat his drug habit, has been sober since and now this young man is a loving husband, caring father who brings his family to church and now has his own testimony to share with others to bring them to Christ. Jaime Hernandez was an inspiration to all who knew him. He was a very sociable, loving, caring man. Was never afraid to talk to anyone about anything, especially about The Lord. He touched a lot of lives throughout his many years and travels. He brought a smile to people's faces simply with his presence. His smile lit up a room. People were happy to see him and spoke very highly of him. Jaime Hernandez Sr was a GREAT MAN! A True Man Of God! He touched many hearts and saved many souls with his preaching's and testimony. He will be truly missed, but NEVER forgotten. We Love You Jaime Hernandez Sr. By Daughter Ruthie Hernandez 7/28/14

Jaime Hernandez Sr was a good man, NO.... He was a GREAT MAN! He was always smiling and laughing no matter what was going on around him. He was born January 10, 1944 to parent's Manuel and Carmelita Hernandez. He was brother to Elenor who passed... View Obituary & Service Information

The family of Mr. Jaime Hernandez, Sr. created this Life Tributes page to make it easy to share your memories.

Send flowers to the Sr. family.