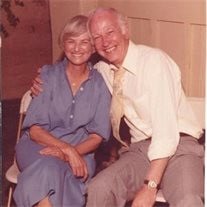 James Joseph Stack Jr. was born on May 11, 1923, one of six children, in New York, NY to James Joseph Stack Sr. and Ella Stack (Higgins), proudly of Irish descent. Jim enlisted in the Air Force Division of the US Army in 1943. He served his country with great bravery in World War II. For his demonstrated heroism, he received a number of honors and medals, including the Soldiers Medal for saving a life with the risk of personal peril, for rescuing a fellow crew member from the burning wreckage of a plane. After the war, Jim returned to Fordham University and graduated in 1949 with a B.S. in Mathematics and a Minor in English. He received his Masters in Business Administration from New York University. Jim met his life's true love, Mary Catherine Stack (Sullivan), in 1949, beginning his courtship by taking his future bride to a baseball game between the New York Giants (Jim's favorite team) and the Brooklyn Dodgers (Mary's favorite team). The Dodgers won. Mary and Jim were married in 1950 and were inseparable through 48 years until her death. They had two children, Kevin James, in 1951 and Coleen Mary, in 1955. Their children meant the world to them and Jim was an involved and affectionate father. His courage and faith were tested when his beloved Colleen died in a car accident in 1977. Jim worked in the advertising business for 40 years, moving to Los Angeles in 1964, where he took a job as media director with McCann Erickson. He later became the media director for the Russ Reid Advertising Agency in Pasadena, focusing on humanitarian and charitable organizations such as UNICEF, St. Judes and World Vision. Jim loved baseball and was an accomplished player in high school, college and in the military, even playing one summer of minor league ball for the Chicago White Sox organization. Jim was predeceased by his wife Mary Catherine and daughter Coleen Mary, now joyfully reunited. He is also predeceased by his brothers Tom Murray, and John Stack and his sisters Gertrude Schonberger, Helene Danielson, and Betty Ryan. He is survived by his son Kevin James Stack, daughter in law Laura Beth Stack, grand children Eric John Ghiselli, Brian James Stack, and Kelly Coleen Stack, brother in law James Sullivan, sisters in law Peggy Corrigan, Mickey Stack and Carol Murray, and numerous nieces and nephews. Contributions may be made in Jim's name to the Collings Foundation PO Box 248 Stow MA 01775, supporting living history events dear to his heart, including maintaining the airworthiness of one of the last B-24's still flying for generations to come. http://www.collingsfoundation.org/menu.htm

James Joseph Stack Jr. was born on May 11, 1923, one of six children, in New York, NY to James Joseph Stack Sr. and Ella Stack (Higgins), proudly of Irish descent. Jim enlisted in the Air Force Division of the US Army in 1943. He served his... View Obituary & Service Information

The family of James Joseph Stack created this Life Tributes page to make it easy to share your memories.