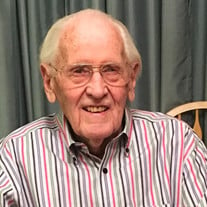 James Edward Kolberg, 93, of Granada Hills, went home to be with the Lord on Saturday, November 27, 2021. James “Jim” was born November 9, 1928 in Red Wing, Minnesota to Almer and Edith (Haller) Kolberg. The family took a pony cart to church every Sunday and ice skated together during the winter, but they were never allowed to skate on their uncle’s pond despite their wishes. Jim enlisted in the Navy in 1948. For four years, he served in San Diego. During that time, he married Joyce Olson with whom he raised four children. After completing his enlistment, he worked in Aeronautic and Space Controls, traveling the world and flying Air Force One with President Reagan. On September 19, 1993, Jim was baptized at Shepherd of the Hills church in Porter Ranch. He was an active member and managed the Sunday bulletins and counting money. He loved Tom Clancy novels and has fond memories of his mother’s pot roast, who also taught him the importance of being kind to others. Jim is survived by two sisters, Dorothy and Sandra; his children, Mike (Fatima) Kolberg, Lou Ann (Tom) Brown, and Diane (Wayne) Sobie; his five grandchildren: Wesley (Katie) Brown, Colin (Rebecca) Brown, Jonathan Brown, William (Lisa) Brown, and Emilie (Clayton) Sandham; and his nine great-grandchildren. He was preceded in death by his wife; his parents; his siblings, Byron, Gwen, Norma, Patricia, his twin brother Thomas, and Suzanne; and his son, James. Memorial gifts can be made to : Assisted Home Health & Hospice Foundation 72 Moody Ct. Suite 100 Thousand Oaks, CA 91360 or Shepherd Church 19700 Rinaldi St, Northridge, CA 91326

The family of James Edward Kolberg created this Life Tributes page to make it easy to share your memories.

James Edward Kolberg, 93, of Granada Hills, went home to be with...

Send flowers to the Kolberg family.