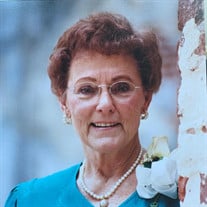 Joan Evelyn Gallas Passanante, 90, passed away on May the 26th, 2021 in Los Angeles, California. She was born in Chicago, Illinois on June 7, 1930, the oldest of five children to Edward Anthony and Helen Alice Gallas. The Gallas family moved to Hillside, Illinois, where Joan graduated from Proviso High school in 1948. Later that year, Joseph Anthony Passanante skated into her life at the Villa Park roller rink, and the rest is history. On December 2, 1950, Joan and Joe married, and the industrious young couple began building their own home in Bensenville, Ill. Joan was always a great sport--working right alongside her husband in their ambitious endeavor, even when she learned they were expecting. Her stint as Joe’s assistant carpenter ended the day she got stuck in the attic in her 7th month because she couldn’t turn around and climb down the ladder. By the time they welcomed Jeffrey Joseph in 1953, the attic was finished. Jeff was followed by James Joseph in 1956, Janice Joan in 1957 and John Joseph in 1959. While Joan was first and foremost a mother to her four children, she managed the home and still found time to serve as the office manager for Joe’s company, Courtesy Plastering. In 1965, the family moved to the San Fernando Valley in California when Joe began working as a plasterer at Paramount and Universal Studios. They bought a home in North Hollywood and later moved to Sunburst Street in North Hills. In Los Angeles, Joan was active in the Parent Teachers Association and worked for Farmer John, Carnation and SEB cookware from 1971-1973. Joan began her career at Redken Laboratories, Inc. in 1974. She was especially proud of the time she spent at Redken, and she loved her job. In her almost 20-year tenure, she worked her way up from a clerk typist in the Hair Research Division to the Coordinator of Product Evaluation and Executive Secretary. Joan Retired in 1992 so that she and Joe could travel the world, and travel they did, visiting Singapore, Hong Kong, Greece, Jerusalem, Sweden, Norway, Demark, Russia, Great Britain, France, Spain, Germany, Switzerland, and of course, Italy and Sicily. She and Joe were part of the Patrician Travel Club of North Hollywood and travelled with many friends. They were active in the Italian Catholic Federation at St. Jane Francis and the St. Charles Borromeo Parish, where they attended many dinners, dances, and events. Joan was loving and compassionate, and she found joy and humor everywhere. Among her many talents was her wonderful resourcefulness- a gift that she inherited from her father. When faced with an empty pantry at the Wawona campground in Yosemite Park, she turned the meager canned contents of a nearly empty pantry into what would become a family favorite. She could create magic from the ordinary, and her culinary alchemy ranged from her famous ‘Wawona Stew’ to all the marvelous meals whipped up at a moment’s notice whenever unexpected company dropped by. Everyone was welcome. Joan was a treasured friend, a beloved wife and mother, and a devoted grandmother. Her family was everything to her, and she made sure they knew it, immensely generous with her affection, time and energy. She was quick with a laugh, even quicker with a hug, and the sparkle in her eye made everyone whose life she touched feel special. Joan was preceded in death by her beloved husband of 64 years, Joseph Passanante, her siblings Edward A. Gallas Jr, Marlene M. Gallas(Lundborg), Linda L. Gallas (Glover), and Judith A. Gallas (Oeffling), and her parents Edward Anthony and Helen Gallas. Joan is survived by her sister Phyllis G. Pugh (George), sister-in-law Anna Parker, son Jeffrey J. Passanante (Patty) and granddaughter Nicolina Booth (James); son James J. Passanante (Susanna) and grandson Dr. Giovanni Passanante, granddaughters Jessica Lowe (Garrett), Melissa Misurelli (DJ), Vanessa Barton (Caden), Krissta Norman (Sumner); daughter Janice Lynn (Gary) grandson Robert Lynn and granddaughter Kelsey Lynn; son John J. Passanante, grandson Jeramiah Houghton-Passanante (Jessica); 17 Great Grandchildren : Brayden Passanante (Amanda), Italia Passanante; Bella, Jade and Jerrick Houghton-Passanante; Gabriel, James, Vivienne and Gemma Lowe; Alayna, Adalynn and Alexis Booth; Kiera and Lily Savage, Roman, Ezra and Hazel Misurelli, and 2 great-great grandchildren: Cedar Jean and Donatello Passanante. In Lieu of Flowers, please send donations to the Motion Picture Fund or the Diabetes Foundation

Joan Evelyn Gallas Passanante, 90, passed away on May the 26th, 2021 in Los Angeles, California. She was born in Chicago, Illinois on June 7, 1930, the oldest of five children to Edward Anthony and Helen Alice Gallas. The Gallas family moved... View Obituary & Service Information

The family of Mrs. Joan Evelyn Passanante created this Life Tributes page to make it easy to share your memories.

Send flowers to the Passanante family.