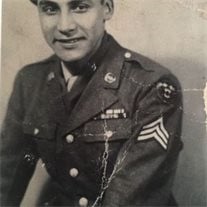 Event.observe(window, 'load', googleTranslateElementInit); function googleTranslateElementInit() { new google.translate.TranslateElement( {pageLanguage: 'en', multilanguagePage: true}, 'google_translate_element'); if (navigator.userAgent && navigator.userAgent.match(/Firefox/)) { // This is a terrible terrible hack, Google Translate blows away the sound on Firefox. // Calling reboot seems to bring it back. soundManager.reboot(); } } John Vasquez Arebalos, 94, of San Fernando passed away Tuesday, November 3, 2015, at his home. Born Dec. 27, 1920, in San Diego, CA, John was the son of Monica Nativida Vasquez Arebalos and Benino Arebalos. John was preceded in death by his wife Irene Helen Arebalos in 2001. John was proud of his service as a member of the Civilian Conservation Corps (CCC) and that he served honorably in World War II in the Philippines Islands, New Guinea and as an MP throughout the pacific theater with the U.S. Army and later as a Sergeant with the US Army Air Corps. It was during this time he met Irene and fell in love with her eyes and innocence. The couple married in 1948 and made their home in San Fernando with their three children Ernest, Christine and later in life Jason. John was a retired member of The International Association of Machinists and Aerospace Workers and proudly worked for Lockheed in Burbank California for 32 years as a member of the famed Skunkworks. Surviving are his children: Ernest (Laura) Arebalos, Christine (David) Mashagh, Jason (Kirsten) Arebalos, grandchildren Celena (Mike) Hosford, Shauntay (Kenneth) Ilko, David (Tiffany) Mashagh, Jonathon Arebalos, Joseph Arebalos, Hannah Arebalos, Sarah Arebalos, great grandchildren Kennedi Hosford, Ethan Hosford and Luke Mashagh. John was predeceased by his granddaughter Kristen Cynthia Arebalos. The true measure of a man's legacy is what he leaves behind once he is gone. John's children and his grandchildren are an outstanding example of this. John instilled in them the need for humility and pride and gave them the guidance to succeed and live the American dream. We will see you later Guy.

The family of John Vasquez Arebalos created this Life Tributes page to make it easy to share your memories.

Send flowers to the Arebalos family.