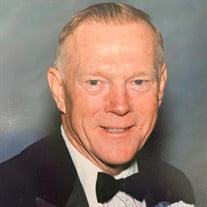 JOHN CLAUDE JOHNSON Born: July 3, 1927, near Navajo, Montana Died: November 26, 2021, in Oceanside, California, age 94 When all the things that Johnny did are listed, it seems impossible that one man could accomplish so much good in one lifetime. The world has lost an exceedingly kind and generous man at the passing of John Johnson. John was born on a ranch in the far northeast corner of Montana to Arthur and Julia (Lorenzo) Johnson. He was the last born, so he was called Tyke. His older siblings, all passed away now, were Arthur, William, Charles and Consuelo. Early Life was tough. The ranch (Bar over Y, Lazy D) was poor, and the weather was ferocious. John’s mother got cancer and died in 1939. John moved in with neighbors and then went to Chicago where his dad was working as a machinist. John had always wanted to be a machinist, so he apprenticed with the railroad. It was World War II and John joined the Navy in 1944, served in the pacific for 14 months and was honorably discharged. He finished his apprenticeship, but decided to go west to Tucson, Arizona in his new 1949 Packard where he met his Dream Girl, Valeska Hantel. He courted her by taking her cave exploring and horseback riding. Val went back to Michigan and John soon followed to convince her to marry him. And they did: August 4, 1951. They left the Midwest, heading for California towing an Airstream trailer. John was hired by Lockheed, October 1951. He started as a Machinist, became a Tool and Die maker, ending as a shop supervisor before retiring in 1990. But for fun, John was always on the move… off roading in Jeeps, hiking the Sierras and searching for gold all over California. He prospected in Holcomb Valley and near Death Valley with lots of adventures and not much gold. John was active with the Boy Scouts since 1952, even before his sons were born. He was a Cub master and a Scoutmaster and led scouts over thousands of miles of trails in his 50 plus years of being a Scout Leader. The Boy Scouts of America awarded him the Lifetime Achievement Award and the Silver Beaver Award for his outstanding service. John and Val were active square dancers with the Silver Dollars and then the Stem Winders Club for decades. During their numerous travels, they met and danced with other groups all across the country. When John retired, he had the time to become a Mason. He joined Lodge 355 and received his 32nd Degree in Masonry. Being John, He worked on community helping projects. He volunteered on the Child Identification Program and helped fingerprint over 17,000 children. John earned the Daniel Carter Beard Award for service to the Boy Scouts while being a Mason. John volunteered at the San Jose Elementary school for more than 50 years. He started when his sons were young, and in retirement spent 4-6 hours a day there. He said, “I did things for the teachers so they could concentrate on teaching”. His beloved Valeska died in 2016 and John will join her at the Riverside National Cemetery. John was the father to 2 sons: Curtis born 1957 Kenneth born 1960 (deceased) And grandfather to: Brett Hackleman Glenn Hackleman Matthew Johnson (deceased) Deidre Canales Russell Johnson Dana Johnson And beloved uncle to many admiring nieces and nephews. Dad dedicated his life to helping people everywhere he went. This included his birth state of Montana where he made donations for more than 30 years to numerous Native American children's charities. So, in lieu of flowers, please consider making a donation to a Montana Native American Children's charity of your choice. Below are a couple of suggestions: The American Indian College Fund: https://collegefund.org/ St. Labre Indian School: https://www.stlabre.org/

JOHN CLAUDE JOHNSON Born: July 3, 1927, near Navajo, Montana Died: November 26, 2021, in Oceanside, California, age 94 When all the things that Johnny did are listed, it seems impossible that one man could accomplish so much good in one lifetime.... View Obituary & Service Information

The family of John Claude Johnson created this Life Tributes page to make it easy to share your memories.

Send flowers to the Johnson family.