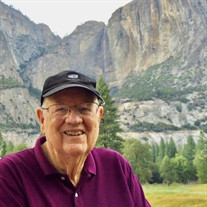 John Ernest Luttge passed away on Sunday, November 22, 2020, in Nipomo, CA, surrounded by family. He was 92. Born February 17, 1928, in Burbank, he was the son of J. Ernest “Ernie” Luttge and Mary Edrie Lyons Luttge. He lived most of his life in Sherman Oaks and was a devoted parishioner of St. Cyril of Jerusalem Catholic Church in Encino. John spent his career as a French professor at Cal State Northridge, retiring in 1994 after many years teaching literature and language classes. He received his BA, MA, and PhD from UCLA, and also studied French at the Sorbonne for a year in Paris . In 1980, John received the “Distinguished Professor Award” at CSUN. From 1951-53, John served during the Korean War, first as a Navy Seaman and then as an Army Corporal stationed in Orleans, France. While there, he made lifelong friends and deepened his love for all things French. Besides his faith, John had a passion for travel. He spent many years visiting Europe with friends and colleagues, took Hawaiian vacations and motorhome trips throughout the US with his friends Al Ford and Linda Stones, joined his friends Willie O’Malley, Bob Cruz, and the Bob Kochakji family for yearly trips to his beloved national park, Yosemite, spent many Christmas holidays with the Richard Stones family in Mission Viejo, and camped as a boy at El Capitan Beach with the Stollmeyer and Basulto families. John also was an accomplished piano and organ player. As a teenager, his Uncle Bud and Aunt Marg hired him during summers to play at their hotel bar in Big Bear. The experience left the young, impressionable John watching tipsy tourists and learning lessons on drinking martinis at high elevations. When speaking of John, people praise him as a gentle soul and great listener, who used only kind words when speaking of others. And when his health faltered, he was the best of patients and expressed his gratitude daily for the care he received from family and friends, and doctors and nurses. John was respected and loved by all who knew him, and “Uncle Johnnie” became a role model to many, especially his younger cousins, godchildren, and “adopted” nieces and nephews. He was preceded in death by his parents Ernie and Mary, his grandparents John Ernest and Bertha Luttge, and Anace and Rose Lyons, also his uncles and aunts Fred and Edna Luttge, Margaret Lyons Boone Glass and Norman “Bud” Glass, and Ed and June Lyons, first cousins Ronald Boone and Patrick Lyons, good friends Al Ford and Jack Bryant, and numerous other uncles, aunts, and cousins who have long ago passed. John is survived by his first cousin Gail Boone (wife of Ronald), first cousin Charles Lyons and his wife Jan, first cousin Linda Lyons (wife of Patrick), cousins and caretakers David and Sherrie (Boone) Amido, cousins Debi Boone Dutra, Rebecca Boone Miller, Cindy Boone, David Boone (wife Alma), Michael Lyons, Oliver Lyons (wife Lucy), and Maggie Lyons Ryan (husband Terry), also numerous younger cousins who knew him as “Uncle Johnnie.” John also leaves behind close friends Warren Bakley, Linda Stones, Willie O’Malley, Bob Cruz, Dolores Tukich, Lucille Adamcik, and Cal and Rosemary (Stollmeyer) Wilvert. Because of COVID-19, a small outside service will be held at St. Cyril of Jerusalem Catholic Church in Encino, followed by a burial at San Fernando Mission Cemetery. Donations in memory of John can be made to St. Cyril of Jerusalem Catholic Church for the “Parish COVID Emergency Fund.” Donate on the church’s website or make a check payable to “St. Cyril of Jerusalem” noting in the memo line the “Parish COVID Fund” and mail to 4601 Firmament Ave., Encino, CA 91436.

The family of Mr. John Ernest Luttge Jr. created this Life Tributes page to make it easy to share your memories.

Send flowers to the Luttge family.