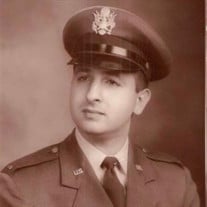 Joseph Francis Oliveto Simi Valley, California On April 18, 2019, Joseph Francis Oliveto, peacefully passed away at the age of 88 at his home in Simi Valley, California. He is survived by his loving wife of over 60 years, Virginia Oliveto, his children Veronica (Keith) Scheyving, Frank Oliveto, Hugh (Linda) Oliveto, Dante (Tracy) Oliveto, Rudi (Brian) Gandy, and David Oliveto, his nine grandchildren, Kimberly (Grant) Bauer, Dante Oliveto, Joshua Scheyving, Amanda Oliveto, Randi Oliveto, Sydney Watts, Marek Gandy, and Lukas Gandy, and great granddaughter Brooke Lynn Bauer. Joseph was preceded in death by his parents, Francisco and Chichina, brothers Tony and Patsy, sister Fannie Kensic, and grandson Joseph Oliveto. He is survived by sister Mary Jane Canjar. The child of Italian immigrants from Catanzaro, Calabria, Joseph was born on October 4, 1930 in Clarksburg, West Virginia. Fondly known as Joe-Joe to friends and family in the Glen Elk neighborhood of Clarksburg, he graduated from Washington Irving High School in 1948. He interrupted his studies at West Virginia University to enlist in the United States Air Force during the Korean conflict, and served five years as a first lieutenant and jet pilot. He graduated from West Virginia University with a B.S. in Electrical Engineering in 1958, shortly after meeting and marrying his wife, Virginia (neé Fordyce). They moved west to California, where Joseph began his 30-year career with Hughes Aircraft Company. He earned a master’s degree in Electrical Engineering from the University of Southern California in 1968, and, in the process became a lifelong USC Trojan football fan, attending all their home games with his children. He was honored when his daughter Rudi followed in his footsteps in the USC graduating class of 1990. Joseph valued family above all else and dedicated his life to raising and mentoring his six children and nine grandchildren and, along with Virginia, caring for more than 200 foster newborn babies for Holy Family Catholic Adoption Agency. He had a passion for his Italian heritage and Italian cooking, hosting an annual Christmas party for more than 100 guests. He loved to travel and especially loved family road trips, saving his vacation time to allow for extended cross-country travel and visits with relatives and friends. Through the years, Joseph was active in his children’s lives, coaching baseball, participating in extended Boy Scout camping trips and hikes, and attending his daughter’s theatre events and grandchildren’s sporting events. He was fondly known as “Mr. Oli” around the neighborhood and never hesitated to give his time and encouragement to others. Joseph stayed active after his retirement in 1988. He worked as a tax preparer for H&R Block and a financial consultant at American Express, served as a docent at the California ScienCenter, and taught Engineering courses at L.A. Valley College and L.A. Pierce College. He and Virginia spent a great deal of time traveling to Europe, including multiple trips to visit relatives in Italy. Joseph was active in the Elks Club and served as the President of the Italian Federation of the Catholic Church. A memorial service will be held at St. Peter Claver Parish located at 2380 Stow Street in Simi Valley on Thursday, April 25 at 10:00 a.m. In lieu of flowers, donations may be sent to St. Jude Children’s Hospital and the Samaritan Center of Simi Valley located at 280 Royal Avenue, Simi Valley, California 93065. Arrangements are under the direction of Erick Perez, Utter McKinley San Fernando Mission Mortuary.

The family of Mr. Joseph Francis Oliveto created this Life Tributes page to make it easy to share your memories.

Send flowers to the Oliveto family.