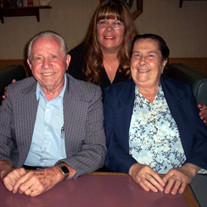 Kenneth Hamer Hathaway was born May 16,1923 in Los Angeles, California. He passed away on February 19, 2021 in Panorama City, California. He served in The Navy in the pacific theater during WWII. He told the story of meeting his brother Wayne who was in the Army on an island in the Pacific. Their commanding officers transferred Kenneth from his ship to meet his brother on the Island for the day. Kenneth and Wayne were thrilled to be together in the middle of the war thousands of miles from home. Kenneth was a devoted member of The Church of Jesus Christ of Latter day Saints all of his life. He married his wife Patricia on October 13,1947 in The Mesa Arizona LDS Temple. In 1950, they bought their home in Sun Valley, California. Their daughter, Gail, was born in 1955. She blessed them with four grandchildren: Nicole, Michael, Renee and Joseph. Seven great grandchildren have followed. Kenneth and Patricia's first great-great grandson, Oliver, is to be born in a few months. They also have a foster daughter, Lorraine. For 40 plus years, Kenneth worked as ward clerk in his church position and following that position, he was High Priest leader for 10 years. He is described as always stalwart, responsible and dependable. He enjoyed greeting everyone at the door on Sundays. Kenneth was a humble man of courage and true faith in the Lord. In addition to his church and family life, Kenneth worked for over 27 years at ITT Aerospace in Burbank, California. He has been retired for 30 years. Also, he and Patricia took in an Indian teenager in a church program. Moreover, they took in 50 foster children over the years. Some of the foster children came for a few days or weeks and then moved on. Kenneth and Patricia provided these children with a stable home life and love. They also cared for Patricia's mother in her last days in their home. For some time, Patricia cared for Lorraine's grandma who lived around the block. Also, Kenneth and Patricia cared for their grand children when Gail needed them. Moreover, they were there for their foster daughter, Lorraine after her heart surgery in 2011. They brought her home for her recuperation. In 2015, overwhelming sadness came to Kenneth and Patricia when they lost their beautiful and loving daughter Gail. They stood by her throughout her life. They did everything they could for her during her illness. Gail was so adored and loved. She is missed so much by everyone. Kenneth made beautiful Christmas Ornaments and family Christmas letters and he gave them to family and friends. Additionally, he kept a daily journal so that he could add to his life story that he was writing. Also. he collected stamps and coins for most of his life. As a young person he played the piano. He was an avid reader of Scriptures and religious books as well as mysteries and novels. He really enjoyed the Harry Potter series. He loved taking family trips to sites in The United States. Family occasions were his favorite. His family was his joy. For the past 4 years, he has been by his wife's side visiting her at a convalescent home Monday through Friday until his health declined. He called her whenever he could not visit. Patricia would sometimes sing love songs to him from the forties, and he was delighted. She had a serious accident, and she has been bedridden to this day. The couple was a favorite of the staff and other patients. Kenneth would hand out ink pens to all the staff. He did that at his church and hospital stays as well. He wanted others to feel appreciated. Almost daily, Kenneth would push Patricia in her wheelchair down the hallways. They would stop and smile and say hello to each patient. Also, they would ask if they needed anything. Usually, patients would smile and wave back. Kenneth and Patricia's care and compassion for others shone through as usual. On their 70th Wedding Anniversary, Patricia came home for a visit. The family held a family dinner celebrating this special occasion. This was noted in an article and picture of the couple in The LA Daily News. They were married for 73 years. Kenneth suffered two strokes recently and he was in rehab. He worked hard trying to recover the use of his left arm and stand with a walker. He eventually was able to walk 50 feet with his walker and move his left hand. He was a determined man. His goal, he said was to join Patricia at her convalescent home. Plans were made for him to transfer there but no admissions were allowed during The Pandemic. He passed away a little over a month before he could be united with his wife. I believe that he saw her and he said his goodbyes to Patricia on his way to heaven. The world is a better place due to Kenneth Hathaway being here for 97 years. Now he is resting in God's love with his daughter, Gail and those family members and friends that have passed on before him. Kenneth and Patricia know that they will be together again for time and all eternity. In the meantime, his family and friends will miss him until we meet again. Kenneth is survived by his wife Patricia Hathaway, Four grandchildren from daughter Gail; Nicole, Michael, Renee, and Joseph. 7 great grand children, 1 great-great grandson, Oliver. A foster daughter, Lorraine Young. 1 nephew Paul Hathaway and Lisa Hathaway Cummins his niece. Also, Kenneth is survived by his sister in-laws Janet and Barbara and their 14 children between them as well as his many friends. _______________________________________________________________________ March 8, 2021 Obituary written by L. Young

Kenneth Hamer Hathaway was born May 16,1923 in Los Angeles, California. He passed away on February 19, 2021 in Panorama City, California. He served in The Navy in the pacific theater during WWII. He told the story of meeting his brother Wayne... View Obituary & Service Information

The family of Mr. Kenneth Hamer Hathaway created this Life Tributes page to make it easy to share your memories.

Kenneth Hamer Hathaway was born May 16,1923 in Los Angeles, California....

Send flowers to the Hathaway family.