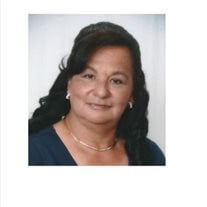 Maria Jessie Mendoza Sister, Mother, Grandmother, & Aunt Jessie was born on February 16, 1949 in Van Nuys, CA and went to be with our Lord Jesus Christ on December 10, 2014 at Holy Cross Hospital, Mission Hills, CA. Jessie was born and raised in Van Nuys, CA. Worked many years for Sylvan Park Elementary. Where she also attended as a child. She worked and retired from Cal State Northridge. Where she grew to consider many of her CSUN co-workers as close friends. Jessie was a very loving and giving person to those she loved. She was a person who would not only give you her last penny but would also give you the shirt off her back. She was more than an aunt to many of us. She was a mom and to our kids she was "Grandma." She will always live in our hearts and memories forever. We will always love her from the bottom of our hearts. She is survived by her son, Richard and her daughter-in-law, Angela, her two grandsons: Peter and Joseph; her great nephews and nieces she considered as her grandchildren and they regarded her as "Grandma": Jessica, Raymond, Gabriel, Christina, Vanessa, Brianna, Bernard, Cookie, Linda, Junior, and Faith; her nephews and nieces as she loved as her own: Lil Larry (Lizzy), Nellie, Jennifer, Anna, Danny (Celeste), Tony, Geoff, & Bernie; by her sisters: Rosie, Chavie, Lena, & Martha and her brother-in-law, whom she loved liked her own brother, Larry Sr. She proceeded in death by her parents (Pedro & Lucy), brothers (Pete Jr & Daniel), her son Raymond, and her two great nephew and niece: Larry III and Anna-Rose. She will be dearly missed by all those she loved and touched in her life. "To be absent from the body, is to be present with the Lord" –2 Cor 5:8

The family of Maria Jessie Mendoza created this Life Tributes page to make it easy to share your memories.