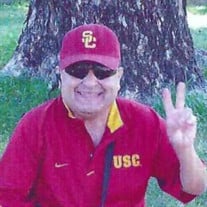 The world lost a light when Miguel &#8220;Uncle Mike&#8221; Cordero Salas left us on the afternoon of Wednesday, July 8th , 2020 in Los Angeles, California. There is nothing that can be said to ease the grief and shock of his family and friends.... View Obituary & Service Information

The family of Miguel Salas created this Life Tributes page to make it easy to share your memories.

Send flowers to the Salas family.