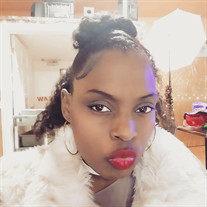 O’Shanta Mika Taylor aka “O”, age 30, was born October 25, 1987, in Landsthul, Germany to her parents Rosalind Harris (Kohl) and Michael Taylor. “O” received her wings on July 6, 2018, after a life long battle with Sickle Cell Anemia “SS” disease. While in California, “O” attended Collins Elementary (Bellflower), Calvary Christian Academy (Compton), Queen of Angeles Academy (Compton), and North High School (Torrance). After relocating to Chesterfield, VA, she graduated from Clover Hills High School in 2005. She returned to California, where she attended College of the Canyons (Santa Clarita) until transferring to Tennessee State University (TSU) in 2007. On December 23, 2007, after accepting Jesus Christ as her Lord and savior, she was baptized at the Church of Messiah in Nashville, TN. “O” always had a positive attitude, a zest for life, strong faith, and a smile that lit up any room she entered. She was thankful for each day she lived, her January 2017, journal entry reads “As long as God gives me the opportunity to continue breathing, I will continue to have the same faith in myself and chase my dreams”. She often spoke of her faith in God, was a Sickle Cell Warrior, powered through each pain crisis with a smile and positive attitude, learned to walk again after back surgery in 2016, she beat the odds of her 21 year life expectancy, and continued to inspire others. She is survived by her mother, Rosalind Kohl; stepfather, Samuel Lewis; sisters, Andrea Crawford (Sean Crawford) and De’Andra Kohl; father, Michael Taylor (Germany); half-sister, Felisha Taylor (Germany); half- brother, Lemar Taylor (Germany), and a host of aunts, uncles, cousins, extended family, and friends.

The family of Ms. O'Shanta Mika Taylor created this Life Tributes page to make it easy to share your memories.

Send flowers to the Taylor family.