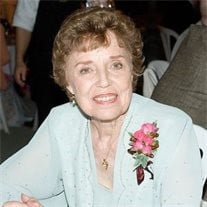 Patricia Ellen Dixon (nee Kelly) was born on February 5, 1932 in Los Angeles, California, and passed away Sunday, July 27, 2014. She lived her entire life in Los Angeles and the surrounding communities of Burbank, Glendale, and North Hollywood. With her husband Robert Thomas Dixon, Pat raised seven children: Maureen, Terry, Alicia, Craig, Brian, Jennifer and Paulette. Theirs was an active household with all of the children's interests, activities and friends. The family also enjoyed many wonderful weekends and vacations at a cabin they built near Lake Arrowhead, and which the family has had now for more than 60 years. As a girl, Pat attended St. Robert Bellarmine Church and Bellarmine-Jefferson High School in Burbank where she made many friends, among them Ellen Carlson (nee McQuaid) and Diane Hydorn (nee Gorman). She was in the third graduating class. Pat met her future husband, Bob, on her high school graduation day and was married the following year. Above all, Pat was a devoted Catholic and a woman of faith. She attended mass daily at St. Anne's Melkite Greek Catholic Church in North Hollywood for more than 37 years and was the director of the English choir for 12. In 1995, the church awarded her its cross of Jerusalem. She was also a great patriot with a strong love of her country. Pat volunteered with The John Birch Society for more than 25 years and was one of the first people to establish the organization in The San Fernando Valley. She then opened her own store, American Opinion Books and Flags. Additionally, she was elected to The Los Angeles County Republican Central Committee, serving from 2008 to 2012. Pat is survived by her loving husband of 63 years, Robert Dixon, her daughters Maureen Dixon, Alicia Apaghian, Jennifer Banzon and Paulette Dixon, her granddaughters Kellie Banzon and Courtney Banzon and her sister Annette Uthe. She is preceded in death by her parents, Walter and Cecile Kelly, her sister, Mary Therese Kalnas, her brother John Michael Kelly and by her three sons, Terrence Dixon, Brian Dixon and Craig Dixon. Pat was loved and respected by many and she will be greatly missed. The services will be held at St. Anne's Melkite Greek Catholic Church on Monday, August 4 at 10:00am, located at 11211 Moorpark St. in North Hollywood. There will be a reception in the church hall following the service. Donations of flowers can be sent to St. Anne's.

Patricia Ellen Dixon (nee Kelly) was born on February 5, 1932 in Los Angeles, California, and passed away Sunday, July 27, 2014. She lived her entire life in Los Angeles and the surrounding communities of Burbank, Glendale, and North Hollywood. With... View Obituary & Service Information

The family of Patricia Ellen Dixon created this Life Tributes page to make it easy to share your memories.