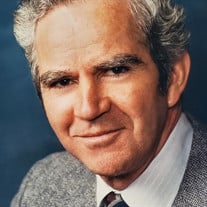 Richard George Doyle MD died at home in Northridge of heart disease on July 8, 2021. He was born on September 8, 1925 in Waldorf, Minnesota to James and Everilde Brecht Doyle, with older brothers James and Bob and younger sister Elizabeth ”Buzz.” The family moved to Owatonna, MN when he was 13 and he graduated from high school in 1943, joining the Navy flight training program. When the Navy’s need for pilots decreased he was assigned to the V-12 program and attended Millsaps College and the University of Oklahoma, earning his commission in 1945. He served at San Diego and Long Beach Naval Shipyards before leaving active duty as a lieutenant and earning a BA in Psychology from College of St Thomas in Minnesota. He was recalled to active duty during the Korean conflict then returned to civilian life and completed his MA in Psychology at Loyola University in Chicago. While taking a chemistry course before beginning medical school he was assigned a lab partner Theo Nina Mörner and they became life partners for 64+ years. After graduation from Stritch School of Medicine (Loyola Chicago) and completion of his residency at Cook County Hospital he moved to California with his growing family and joined Facey Medical Group in San Fernando. He practiced Internal Medicine at Facey for 32 years, beloved by his patients for his compassionate care and sense of humor and respected by his colleagues for his diagnostic acumen. He and his Facey colleagues contributed to the growth and resilience of Holy Cross Hospital through earthquakes in 1971 and 1994. He continued to attend biweekly educational lunch meetings at Holy Cross in his retirement until the pandemic curtailed in-person gatherings. In retirement he also pursued his interests in history, art, geology and collecting.He served the San Fernando Valley Historical Society as a long-term board member and for a term as President. He and Theo were members of the California Art Club, the Antiquarian Society, The Westerners, the Santa Clarita Valley Historical Society, and Del Air Rockhounds, gaining many wonderful friends through their activities. Richard attended weekly Mass at the San Fernando Mission led by Msgr Francis Weber and served on the board of the Mission’s Archival Center. Dr. Doyle was appreciated by the local Catholic community for his generous medical care for many priests and sisters and was honored by being selected as the local on-call physician for Pope John Paul II during the Pope’s visit to the Mission in 1987. He was especially honored with the Benemerenti Medal in 2010 for exceptional service to the Church. He is survived by his wife Theo, children Mary (Link) Hansen, Tom (Nan), Georgia, and Greg (Kristine); grandchildren Georgia, Phillip, Nina, Tom, Kristina, William, and Margot and great-granddaughter Elizabeth (Buzz). At this time the services for Mr. Doyle have been postponed. We will update this page when information becomes available. In lieu of flowers donations may be made to the San Fernando Valley Historical Society, the San Fernando Mission Archival Center or the charity of your choice.

Richard George Doyle MD died at home in Northridge of heart disease on July 8, 2021. He was born on September 8, 1925 in Waldorf, Minnesota to James and Everilde Brecht Doyle, with older brothers James and Bob and younger sister Elizabeth &#8221;Buzz.&#8221;... View Obituary & Service Information

The family of Richard G. Doyle created this Life Tributes page to make it easy to share your memories.

Send flowers to the Doyle family.