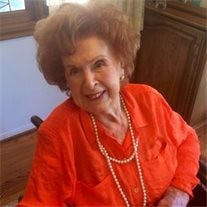 Stefi Biafora died peacefully on July 15, 2017, after 94 years of a joyful and adventurous life. She was a coal miner's daughter, born in Fairmont, West Virginia. She was the youngest of the five children of Ludwig and Regina Poluck from Kraków, Poland. After her High School graduation, she worked at Westinghouse. Her life took a turn when she met Lieutenant Joseph Biafora at a USO dance, and together they danced the Jitterbug to Polish Time. The couple married in 1944 and, as fate would have it, they traveled to Glendale, California, so Joe could deliver the proverbial letter to the family of his best friend, Bob Barker, who died in the Battle of Normandy. Stefi and Joe so loved Southern California that they changed their plans and remained in Glendale, where Joe completed his Law School Education at USC. Stefi again, worked at Westinghouse in Southern California and played basketball for the company. Along the way, Stefi and Joe made many lifelong friends throughout Southern California. Joseph opened his Law Office in Reseda, and Stefi was the Law Office's Chief Secretary and promoter. They moved to Northridge and resided there for 61 years. Stefi was an avid golfer and for years had the lowest handicap at her golf club, and always walked the course. Stefi was involved in many charities. She was the President of the Womens' Guild at Our Lady of Lourdes in Northridge. She also was a major fundraiser for the Robert Wilkinson Senior Center in Northridge, which still serves the seniors community. She is survived by her children, grandchildren and great grandchildren: Her daughter Brenda Biafora Navarro passed away in 2013, daughter Linda Biafora Spinella, daughter Diana Biafora Sparagna and husband Francis Jr., son Joseph R. Biafora Jr., son Stephen F. Biafora and his wife Lynn Ruehman, daughter Ruth Anna Biafora, grandchildren Rayna Stephanie Alice Navarro, Romualdo Navarro and wife Shay, Daniel, Jacqueline and Francis Sparagna III, Christian and Alexis, and great-grandchildren Adela Palmira Navarro and Rebecca Ann Sparagna. There will be a viewing on Thursday, July 20, 2017 at 5:00 p.m, followed by a Rosary at 6:00 p.m., and a funeral mass at 7:00 p.m. at Our Lady of Lourdes Catholic Church located at 18400 Kinzie Street in Northridge. Reception to follow. In lieu of flowers, Stefi has asked that you contribute to her Stefi Biafora Leadership Scholarship at West Virginia University Foundation. To pay by credit card, the telephone number is 304-284-4000. The mailing Address is WVU Foundation located at 1 Waterfront Place in Morgantown, West Virginia 26501.

Stefi Biafora died peacefully on July 15, 2017, after 94 years of a joyful and adventurous life. She was a coal miner's daughter, born in Fairmont, West Virginia. She was the youngest of the five children of Ludwig and Regina Poluck from Kraków,... View Obituary & Service Information

The family of Mrs. Stefi Poluck Biafora created this Life Tributes page to make it easy to share your memories.

Send flowers to the Biafora family.