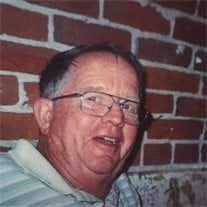 Stephen Michael Dunn Stephen M. Dunn. 82 passed away Friday March 13, 2015 at Holy Cross Hospital in Mission Hills, California. Stephen was born January 4, 1933. He was born and raised in Hettinger North Dakota, the son of Charles M Dunn and Grace E Buzick. He graduated from Hettinger High School in 1953, he left before his senior year to serve in the Army for two years. After graduation he moved to Southern California to pursue an aviation career. He enrolled in Glendale College, to support himself through trade school he worked at a restaurant in Burbank, he often told how that job had a buffet and he would eat his dinner there and pack food for his lunch the next day. He worked for RWS, APS, WECO and retired from Aviall. He married Sherry A Wagner and had three children, after his divorce he raised his children on his own until he married Carol D Buerth on April 18, 1970. He loved to camp & travel. He has been to almost every USA state and traveled Europe. He was a member of Elk Lodge for over 50 years, He was Elk of the year 2001-2002, he joined their camping club and looked forward to their outings. He also enjoy flying, he earned his pilot license. He enjoyed boats and his sailboat, he was a member of the US Power Squadron, he held officer positions and was on the education side, teaching classes. Member of Emmanuel Luther Church, he was an usher and did sound for many years. He is survived by his wife Carol. His three children, Shari Ann (Rusty) Fry, Scott M, Stuart A (Susan), 6 grandchildren, and 3 great grandchildren. He is preceded in death by his parents Charles & Grace, his sister Mary Pat Healey. Memorial Service will Saturday 21st 2015 11:00 am at Emmanuel Lutheran Church, 6020 Radford Ave, North Hollywood, CA 91606 Reception following services In lieu of flowers please make a donation to a Cancer Cause of your choice in his name.

The family of Stephen Michael Dunn created this Life Tributes page to make it easy to share your memories.