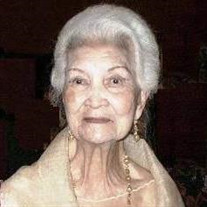 Virginia Flor Agbayani passed away on October 22, 2018 in Sherman Oaks, California. She was 96. She was married to the late Mariano Leano Agbayani and is survived by five children, Anna Victoria Agbayani Resurreccion; and Marianne, John Patrick, Cana-Mari, and Franz John Agbayani; son-in-law, Rey Resurreccion; grandson Carl Francis Agbayani and his wife, Marie. A daughter, Ida Agbayani, died in 1999. Private Catholic services were held on October 30, with a funeral Mass at the San Fernando Rey de Espana Mission Church; and viewing, interment of the ashes, with burial rites and blessing, at the Oakwood Memorial Chapel. Services were followed by cremation, then inurnment at the San Fernando Mission Catholic Cemetery. Virginia Flor Agbayani was a Professor Emeritus at the University of the Philippines in Diliman, Quezon City, Philippines. She was known to colleagues, students and the world of Fine Arts, nationally and internationally, as the “The Grand Dame of Philippine Art Education,” for her pioneering effort and innovative approaches in the inclusion of art education, at the primary and secondary levels, and in the development and nurturing of numerous world-class artists from the Philippine High School for the Arts; teaching at the bachelors and graduate levels, and mentoring a number of Philippine Masters and National Artists, enrolled at the University of the Philippines; and for notable achievements in continuing education programs worldwide. She was a consultant in arts and archaeology, to several international Governments and Professional Organizations. She was a British Council Fellow and Scholar, served as Director of the Southeast Asian Ministers of Education Organization Projects in Archaeology and Fine Arts (SPAFA) and World Councilor for Southeast Asia and the Pacific region, of the International Society for Education through Art (INSEA). She is the recipient of numerous prestigious national and international awards, and was a frequent invited speaker at National and International meetings. After her retirement, she presented invited papers and lectures on Philippine History, Art and Culture at Universities and to Civic Organizations in the United States. Virginia Flor Agbayani was first employed as instructor at the then School of Fine Arts, University of the Philippines, immediately following her graduation in 1947, and obtained the rank of full professor of Fine Arts in 1975- the first woman appointed to the rank. She was instrumental in the transition of the School of Fine Arts to the College of Fine Arts in 1970; served as Chairman of the Studio Arts Department, College Secretary, Graduate Program Coordinator, Officer-in-Charge of the College, and as associate Dean of the College. She was concurrently appointed, Director of the Philippine High School for the Arts, by the President of the Philippines. The Conferment of the title of Emeritus Professor, a significant and prestigious honor for a few selected Professors at the University, provided her with the distinction to continue to lecture and conduct graduate program activities for life.

Virginia Flor Agbayani passed away on October 22, 2018 in Sherman Oaks, California. She was 96. She was married to the late Mariano Leano Agbayani and is survived by five children, Anna Victoria Agbayani Resurreccion; and Marianne, John Patrick,... View Obituary & Service Information

The family of Prof. Virginia Flor Agbayani created this Life Tributes page to make it easy to share your memories.

Virginia Flor Agbayani passed away on October 22, 2018 in Sherman...

Send flowers to the Agbayani family.