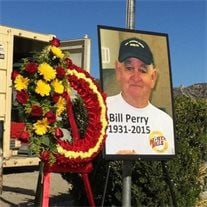 William Marion Perry August 13, 1931 - November 18, 2015 William "Bill" Perry was born in Rome, Georgia, on August 13, 1931. He was the 5th of 9 children born to Jefferson Davis Perry, Sr. and Elizabeth Mae Nichols Perry. After the death of his father when Bill was 14, and not being enamored of school, Bill convinced his mother to allow him to enlist in the Army in January, 1947. Bill went on to serve in the Air Force, and while in the Tennessee National Guard, he was mobilized to serve in the Korean War. During his military career, he worked in teletype maintenance, as a voice radio operator, taught draftees, and lastly worked in Search Radar Systems. He spent one year stationed on a base in Labrador working on early radar systems. It was remote and isolated, and he shared many fond memories of the adventures they had while stationed there. Bill was proud of his country and the service he rendered it. In 1950 on a trip to Etowah, Tennessee, he met Rosene Dunn, and on March 2, 1951, they married. After his discharge from the Air Force in 1956, Bill and Rosene moved to California, obtained employment and sent for their sons Richard (Allen) and Mark. Daughter Susan was born in 1962. Bill and Rosene divorced in 1973. Later that year, he married Marilyn Marden and later adopted her daughter, Marlene. Bill and Marilyn remained married until her death in 2012. Bill worked for General Telephone Company for 31 years, retiring in 1987 to become a very proud, full-time grandfather. He devoted his time, love and energy to helping raise the grandchildren. Bill actively participated with them in baseball, softball and soccer – coaching some of their teams, and attending all of their games. His dedication and commitment to service of others was never more clear than in his volunteerism with AYSO Region 174 where he worked with (and as) the registrar for many years, acted as Field Coordinator, assisted various Board members, and performed many handyman duties whenever needed – he was the guy you called when you needed it done. Bill was truly a role model of selflessness, and always did the best he could in everything he did. Bill was an outdoorsmen, and derived great pleasure throughout his life from camping, hiking and fishing. Bill is survived by his brother Lewis "Punk" Perry; children, Richard "Allen" McKelvey (Chrys), Mark Perry (Linda), Susan (Perry) Young (Dave), and Marlene (Perry) Clyde; his grandchildren Natira (McKelvey) Bookman (Andrew), Jamie Perry, Jeffrey Clyde (Krista), Jessica Young, Kayleigh Clyde, and Jacob Perry. He was preceded in death by his parents, brothers J.D., Tom, John, Harold and Richard, sisters Margaret and Frances, grandson Gary Clyde, and wife Marilyn. He was eagerly awaiting his first two great-grandchildren due in January and February.

The family of Mr. William M. Perry created this Life Tributes page to make it easy to share your memories.

Send flowers to the Perry family.