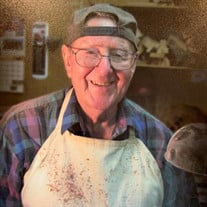 Obituary Willie Hamburger April 26th, 1928 — December 28th, 2020 Willie Lloyd Hamburger was born on April 26th,1928 to Philip and Minnie Hamburger in Corn, Oklahoma, on the family farm. He was the fourth of seven children and graduated from Corn High School in 1947. Willie served his country as member of the Army from 1951-1953, during the Korean War, and worked as a farmer until he moved to Tujunga, California in 1956. He began working a job in body and fender repair and, as fate would have it, he met his wife Darleen Conner “by accident” after she wrecked her car in 1957. He continued to do body and fender work the rest of his working career and retired in 1987. Willie and Darleen married on December 21, 1957 and have three daughters, Julie, Donna and Laurie. They moved to Sylmar in 1960 and have lived there ever since. Willie’s passion has always been woodworking. He started creating wood projects in high school wood shop classes and never stopped. Willie was able to become a full-time wood turner when he retired. In 1994, he moved from the garage into his dream wood shop in the backyard. This is where he spent most of his days turning all types of wood into beautiful works of art and patiently teaching others how to turn as well. Willie’s legacy will forever live on through his gifts which sit in the homes of friends and family all over the world. Some of his other interests were camping, riding dune buggies, gardening and traveling. He was able to travel to every state in the United States, finishing with Maine in 2018. He is survived by his wife of 63 years, Darleen, three daughters and their spouses, Julie and Antonio Chacon of Granada Hills, Donna and Don Logan of Saugus and Laurie and Mark McMorrow of Thousand Oaks, his grandchildren Erin and Eric Askeland of Chesterfield, Missouri, Chris McMorrow and Teresa Chen of Seattle, Washington, Amanda Chacon and Michael Ahs of Oslo, Norway, Taylor McMorrow of Onalaska, WA, Allison Chacon and Kevin O’Shea of Sylmar and Jenny Logan and Evan Mee of Tempe, Arizona. He is survived by 4 great grandchildren, Emmalyn, Ethan and Everett Askeland and Richard Chacon. He is also survived by brother Melvin Hamburger and his wife Claire of Gettysburg, South Dakota, sister Neomi Johnson of Dallas, Texas and sister-in-law Jean Hamburger of Sylmar.

Obituary Willie Hamburger April 26th, 1928 &#8212; December 28th, 2020 Willie Lloyd Hamburger was born on April 26th,1928 to Philip and Minnie Hamburger in Corn, Oklahoma, on the family farm. He was the fourth of seven children and graduated... View Obituary & Service Information

The family of Mr. Willie Lloyd Hamburger created this Life Tributes page to make it easy to share your memories.

Send flowers to the Hamburger family.